A small wooden plaque is mounted next to the café's door. It's a little worn, but the words are very carefully carved, so it's still not too difficult to read. Like the door itself, the plaque is at a slight angle, almost prompting you to tilt your head a little when reading it...

ABOUT THE PAPPUS CAFÉ

Established on November 20, 2017, the Pappus Café was founded as a blog for fellow members of the Creatures Community to enjoy. Like the atmosphere in a real café, the Pappus Café aims to have relaxed, story-like posts with descriptive language that can be enjoyed in peace, best accompanied by the reader's favorite coffee or tea of choice. :) 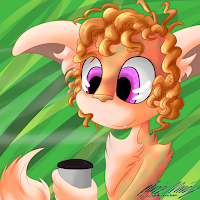 Pixis is a recent college graduate from America, working as an analyst for the infrastructure engineering department at a large company in the city! Her favorite hobbies include drinking coffee, playing video games, watching videos, toy collecting... and learning to cook, clean, and pay bills as a young 20-something new to the adult world.

She has been playing Creatures since roughly 2005, starting out with Creatures 3 and later Docking Station, then branching out to other games such as Creatures 2 and Creatures Adventures. Though she owns all games in the series now, she prefers sticking to C3/DS!

The Creatures Community was Pixis' first home on the Internet, and she hopes that running the Pappus Café will allow her to become closer to the community that she has loved and appreciated for so long.

(Cute button by Pilla! You can visit Pilla at Pilla's DS Agents!)