Applewood Fields || Of Friendship and Gadgets

Life in Applewood Fields resumes a peaceful atmosphere, as the grief that the dangerous disease caused begins to slowly fade away.

Beneath the blinking lights of the Christmas tree, Nith'eroi and Ember meet one another for the very first time. Though Nith'eroi's birth mother was of the very same species that attacked Ember when she was a young child, it seems that she is able to put those differences aside, and the two instantly form a bond.

Together, they play with the radio and fireworks machine set beneath the tree, creating an incredibly noisy display of friendship and harmony despite the nearby Felicia's attempts to sleep.

In fact, they become practically inseparable, and begin to spend every moment they can together! 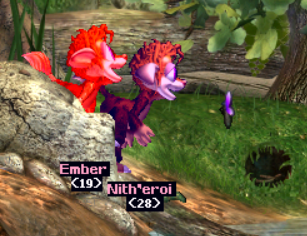 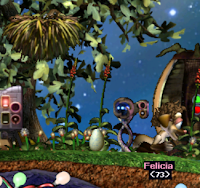 Meanwhile, Felicia is chosen as the next to have a child. Now that Ember is of age and happy adventuring out in the world, it seemed that it was finally time for Felicia to have a child of her own!

After a short while, Felicia settles down and lays her egg beneath the nest of the great Gosh-hawk. Always a protective mother, she keeps close watch near her egg until it hatches, although the woodlands are quite safe these days.

The baby that emerges, however, is a little unusual...

Though she appears to be an Ettin, Felicia's child is, in fact, a Norn! Perhaps an oddly shaped Norn, or the soul of a Norn occupying an Ettin's physical body... but a Norn nonetheless! Felicia, choosing to combine the traditions of her daughter's ancestry (as Nith'eroi told her in tales about her adoptive Ettin mother) with her own customs, names her NRN-01 - a Norn with a neat, orderly Ettish name.

Although she behaves mostly like a Norn in the way she explores the world around her, NRN-01 seems to have a close connection to her Ettish instincts, as she quite enjoys playing with gadgets!

Time and time again, although she does not seem to have any need to collect gadgets as Ettins do, she has a great deal of fun seeking out and playing around with them. Perhaps someday she'll become an engineer?

In the meantime, another Norn also joins the quickly-growing family in the woodlands, this time a Norn born from an Ettin! As her name shows, evidently she is the fifth Ettin so far - even though she's not truly an Ettin, it seems the Ettins accepted her as one of their own. After making the long walk from the terrarium door to the main area, she fits right in with her fellow Norns.

Felicia decides to watch over her, although she seems to be quite independent already, even at such a young age! The unusual (but loving!) family in the woodlands continues to grow...